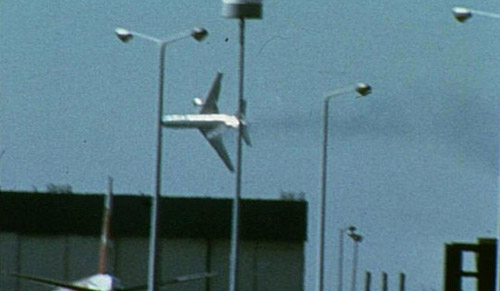 As the plane accelerated during its take-off roll, the left engine (engine #1) ripped free of its mount under the wing. The engine was at full thrust at the time. This pushed the engine forward of the wing where the wind velocity then caught the engine and flipped it back up and over the left wing, where it landed in the runway. The pilots were aware that engine #1 was no longer available, but not that it was no longer attached to the aircraft. Since they had achieved take-off speed, they could no longer safely abort.  Procedure called for them to continue to take-off, and then circle back to the airport to land.  The plane rotated back, and then took flight.

However, when the engine ripped free from the wing, it damaged two of the three hydraulic systems as well as the #1 electric bus.  These hydraulic systems controlled the leading edge slats on the left wing.  Leading edge slats extend the leading edge (front) of the wing forward during times when the aircraft is flying slower, such as during take-off and landing.  By extending forward, they (along with the rear flaps) effectively increase the size of the wing.  This reduces what is known as the “stall speed” – the speed at which lift is no longer provided.

During take-off, the leading edge slats of both wings were fully extended to provide maximum lift.  However, with the loss of hydraulic pressure, there was nothing holding the left slats in place.  The wind generated by forward motion pushed the slats back up into the wing.  This increased the stall speed of the left wing.  However, the right wing operated normally with slats fully extended.  This caused an imbalance in lift between the wings, which then caused the left side to dip.

The pilots were unaware of the flap position or that the aircraft was traveling below stall speed.  This was in part because the pilot’s stick-shaker stall indicator and flap position indicators were unavailable.  These components were powered by the #1 bus, which went out with the loss of the #1 engine.  The co-pilot was in control of the aircraft, but his controls did not include the stick-shaker stall warning – an add-on feature that American Airlines chose to forgo.

The imbalance in lift ultimately caused the plane to achieve a 112-degree angle.  This was simply unsustainable, and the plane crashed 50 seconds after takeoff.

The engine ripped free when the mounting hardware failed.  This hardware had been damaged 8 weeks prior during engine maintenance and subsequent forces of multiple take-offs and landings degraded it to the point of failure.  The damage occurred when the engine was being removed for maintenance.  The engine is attached to a pylon, which is attached to the wing structure.  McDonnell Douglas service manuals state that the engine and pylon need to be removed in separate steps.  However, airlines operating DC10s had discovered that they could be removed together.  This saved many steps and work hours.  However, doing so meant that both engine and pylon required stabilization during the process.

American Airlines chose to use a large forklift to stabilize the engine and pylon during removal.  However, this method was imprecise.  The forklift driver could not actually see the mounting area and had to rely on hand signals from a spotter.  During this particular maintenance operation, the pylon had become jammed which led the maintenance crew to move the engine back and forth.  This caused damage to the rear mounting hardware.  However, this damage was not noticed at the time.  The work was completed, the engine and pylon were reinstalled, and the airplane was returned to service.  The subsequent forces of multiple take-offs, flights, and landings ultimately led to the catastrophic failure of the mounting hardware.