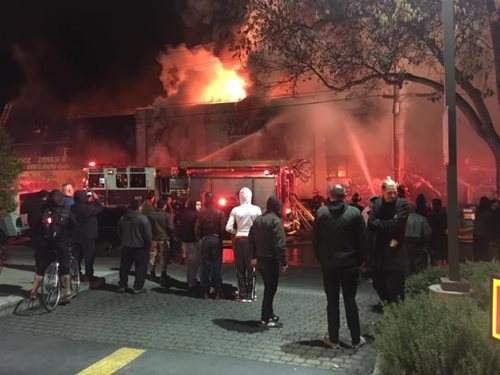 On 2-December, 2016 at approximately 11:30PM, a fire broke out in an Oakland, CA warehouse during a musical performance.  36 people attending the performance died when they were unable to exit the building.  However, there was potential for an additional 66 people to have been injured or killed.  For reference, this was:  1) The deadliest building fire in the USA since the Station nightclub fire in West Warwick, Rhode Island left 100 dead and 230 injured on 20-February, 2003 and 2) The worst such event in the San Francisco Bay Area since the 1906 earthquake.

With an example like this, it’s hard to know where to stop. Take a minute to scroll to the right-hand side of the chart and you’ll gain an appreciation for how complex this problem is – it has causal pathways as disparate as the high cost of housing in the bay area, gaps in governmental oversight, shoddy building practices, incompetent management, and a willingness to under estimate both the probability and consequence of a major structure fire with limited fire suppression and exit points.  But with large catastrophic events like this, that’s what we would expect.  The question is - can we learn enough from this event to dramatically reduce the risk of this happening again?  And will this new knowledge lead to the required changes?

RCA Focal PointThe focal point (starting point) for this analysis is “36 fatalities, potential for an additional ~66 injuries and/or fatalities.”  That’s a longer statement than we normally recommend, but in this case it’s both appropriate and helpful.  It’s appropriate because when people die or are injured, we want that to be the focus of the investigation.  Yes, a few million dollars in damage also occurred.  And yes, there is a potential for legal trouble (both civil and criminal) for many involved parties.  But as a rule, we choose to document these in the Impact section of the Problem Statement.  This choice of focal point language also sets up the cause and effect chart nicely.  It separates nicely into two main branches.  One branch is “36 fatalities.”  This is obviously important because we want to know, specifically, why people died.  The other branch is “Potential for ~66 fatalities/serious injuries.”  This branch will allow us to understand why any of these people were at risk and also, why some of them were able to escape.

Ghost Ship RCA 36 fatalitiesThe cause “36 fatalities” breaks down easily into two branches:  1) “Massive structure fire,” and 2) “36 people could not escape.”  Whenever a fire is involved, it’s a good idea to immediately add placeholder causes for “ignition source,” “combustible material,” and “oxygen.”  Now, since we are talking about a building with a public space in which people lived and congregated, it’s also appropriate to examine why the fire could grow so large, so fast.  The word “Massive” points to the fact that this fire was large and overwhelming.  Why didn’t the fire suppression system kick in to knock it down and/or alert those in the building before it got so big?  At the time of this report, there is no information available about any sort of sprinkler system, alarms, or fire extinguishers.  However, one former resident reported that he would sleep with a fire extinguisher because of the potential danger.

You will notice that the “Combustible Material” branch offers a rich amount of information.  Pictures of this warehouse prior to the fire show combustible material everywhere, from tapestries and textiles to wooden furniture and artwork, as well as the fact that the internal structure was largely wood.  There were reportedly several travel-trailers/RVs on the first floor which may have had tires and propane tanks.  The bottom line is there was plenty of fuel available.

One missing link is the ignition source, but this is a moot point.  Even if investigators determined what exactly started the fire, ignition could have plausibly come from a variety of sources.  The fact is that the place burned because it could burn.  It was just a matter of time before a wire shorted out, a portable heater got too close to a towel, a candle ignited a piece of clothing, or any other array of ignition scenarios.

Okay, so that explains the fire and why it got so big so quickly.  But why didn’t people just run out when they saw the smoke and flames?  A graphic from the New York Times clarifies just how much of a maze this place was.  A musical performance was taking place on the second floor.  But to get to this area, attendees and musicians had to wind around multiple obstacles to then climb a stairway that had been built partially out of used pallets.  Previously this part of the building had been occupied by a conveyor belt.  The stairway was built after removing the conveyor equipment.  The only possible additional exit was a kitchen window on the second floor.  The fire started on the first floor and was fully involved before those on the second floor were aware of it.  The area immediately filled with thick smoke, making it impossible to see or breathe.  The lights went dark.  And those who didn’t find their way out were quickly overcome by smoke.  Even though firefighters arrived on the scene within minutes, there was no way for them to safely enter.  People either got out on their own, or they didn’t get out at all.

Potential for an additional ~66 fatalities/serious injuries:
This branch begins by breaking down the numbers.  There were an estimated 50 people in the building at the time of the fire.  52 firefighters arrived on scene.  Therefore, an approximate total of 102 people were potentially at risk.  Breaking the larger number down into smaller subsets allows us to examine their various experiences along with what brought them together at this place and time. 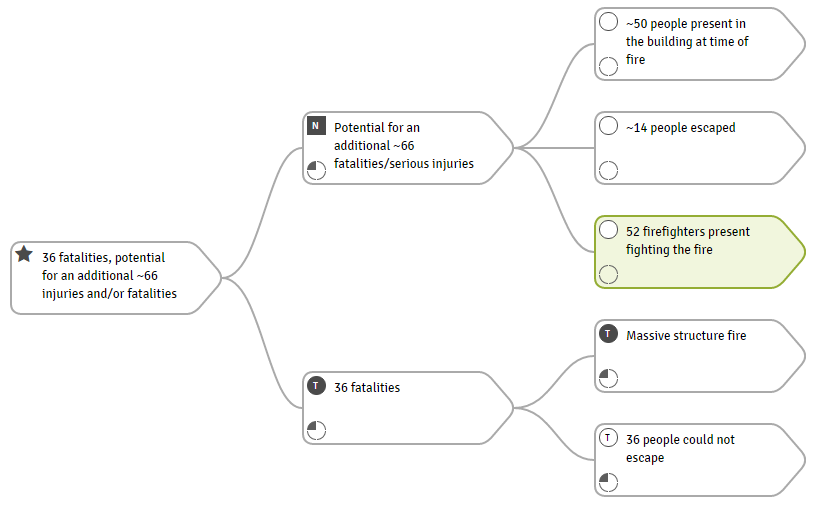 But why choose this location?  What information was (or was not) considered in making that decision?  Apparently, the record label had used this space in the past and found it desirable.  While investigating an incident like this, your lines of questioning should include past experiences, whether risks were discussed or assessed, and if so, how did those discussions ultimately lead to the decision to go ahead with this choice?

This is very interesting ground for the RCA investigator because it provides an opportunity to uncover how people address risk.  How do our minds work when we desire an outcome, but are required to assume risk to achieve the outcome?  How do our past experiences shape our decision to proceed, or not to proceed?  This line of questioning can lead to a greater understanding of how we perceive, react to, and manage risks.

It’s also fraught with risk for the investigator because these lines of inquiry are often perceived as an attempt to assign blame and lay the groundwork for punishment.  Particularly in this case, due to the extreme impact, a great deal of skill (and perhaps immunity from consequences, and/or allowing sources to contribute anonymously) is required to extract honest answers.  No one wants to stack wood wide and high around the pole they will ultimately be tied to.

Also, people lived and worked here.  Why would they do this, even when at least some of them clearly recognized that the place was at risk of burning?  There are the economic realities of life in the Bay Area – it’s expensive.  The technology boom has brought a lot of new residents to the area and all of them make a substantial amount of money.  There is a limited amount of housing available.  People who have housing don’t want to enter the market, so inventory remains bottled up.  This drives up the price of housing, which in turn applies pressure on those who desire to live in the Bay Area, but who do not have a lot of money.  Artists like those that rented space in the Ghostship could move to a cheaper town, but why would they?.  They had the Ghostship.  Prior to the fire, it probably seemed like a perfect solution.

This warehouse was available.  The owner found a single person to rent it to, and then either explicitly or implicitly allowed that person to sublet it out to many other people.  Because it was not intended to be a residential space, the overall rent was low enough and the space large enough to profitably offer up multiple individual spaces to those who desired such accommodations.  The freedom from high rents and restrictive regulations allowed tenants to make the space into whatever they wanted it to be.

A variation of the risk discussion we had earlier is applicable here as well.  Residents liked the space and wanted it to be home to them.  They could afford it.  There were limited rules.  The owners were on board – as long as the rent came in on time, they were happy.  Most importantly to everyone, no fire had yet occurred.  In fact, no fires had occurred in any of the other multiple similar warehouse dwellings around Oakland (or anywhere else, for that matter).  This likely played into the perception that the risk of residing in the Ghostship (and using it as a music venue) was worth taking.

The City of Oakland plays a significant role here as well.  The City building and fire departments could have identified these risks and shut the place down.  But they didn’t.  Why not?  Apparently, building inspectors had recently attempted to inspect the place, but were unable to gain access, so they left.  The fire department has a reported 62 vacancies of positions that have been funded, but not yet filled.  This building hadn’t been inspected in more than 30 years, if ever, despite a requirement to inspect every 2 years.  Clearly, there are massive systemic issues with how the City of Oakland is being managed.  A cause like this is often a launching point into a different investigation.  Hopefully the City of Oakland will recognize this event as a wake-up call that city residents are at risk and that the gaps uncovered by this, and subsequent investigations, need to be closed.