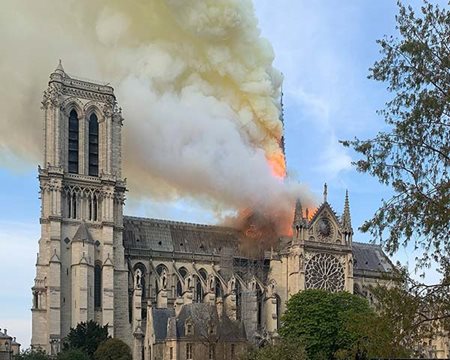 On April 15, 2019 at about 6:20PM a fire started in the main attic of the Notre Dame cathedral in Paris, France.  No one was injured or killed which is amazing due to the popularity of Notre Dame as a tourist attraction, the fact that mass was happening at the time the fire started, and also given that there were hundreds of responders.  There was, however, extensive damage to the structure as well as lost or damaged historical artifacts including the 600 year old timber framing of the attic.  If not for the heroic efforts of the fire crews fighting the fire, the cathedral would have been a total loss.  While precise estimates to restore the building are not available, some say it could cost as much as a billion US dollars and take decades to complete.

All fires have three primary contributing causes – heat, fuel, and oxygen.  When we investigate structural fires, we look at the preceding causes of each of these three main story lines.  We also look at the response to the fire.  Did it help, hurt, or was it essentially ineffective?  We can always learn from the response.

Most people consider the ignition source to be the single most important cause of a fire.  When we hear news reports about forest fires, the focus is often on what started the fire.  Was it accidental, such as a campfire, exhaust pipe, or electrical spark?  Was it due to negligence, such as fireworks or smoking materials?  Was it purposeful – arson?  Or was it due to natural causes, such as lightning?  These are all important hypotheses that should be examined.  Certainly, any credible fire investigation will attempt to discover the ignition source.

However, the “causes” of combustible material and oxygen are just as important as the ignition source.  Have you ever tried to burn a chunk of concrete (good luck)?  What happens of you put a glass over a lit candle (it goes out)?  They call it “the fire triangle” for an important reason – without any one of the three, the fire cannot exist.  Therefore, the stories of the combustible material and oxygen are just as important as the story of the ignition source – and perhaps even more.  Why?  Because oxygen and combustible material act as “constants” in the causal equation.  They exist, together, over a period of time.  In the case of Notre Dame, the wood of the attic and oxygen occupied the same space for centuries, waiting for an ignition source – the variable in the equation.  The constants are predictable.  That means they can be controlled in advance of any triggering variable.  While people may argue over whether the word “cause” applies to things that simply exist, such as wood or oxygen, no one can argue their importance to the event of “fire.”  FYI:  At Sologic, we use the word “cause” to describe all relevant contributors to an event.  We find it useful to define causes that trigger an event as “transitory” causes because they represent a point of change – a transition point – from one state to another.  The ignition of a fire would therefore be labeled as a transitory cause.  Causes that are required participants in the event, such as combustible material and oxygen, we label “non-transitory.”   You will see these labels in the cause and effect chart that supports this root cause analysis (“T” and “N”). 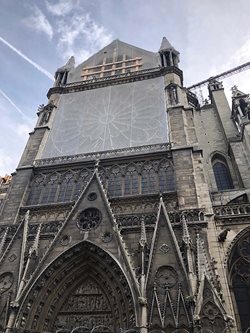 Why the discussion about cause types?  Because it helps us build an accurate causal model, regardless of the event we are investigating.  But it is particularly relevant to the Notre Dame cathedral fire because investigators have not been able to pinpoint the transitory initiation of the fire.  They did find evidence of smoking materials from workers restoring the roof.  Smoking is prohibited, but they were doing it anyway.  However, there was no obvious link between cigarette butts and/or matches and the fire.  Electrical ignition was also examined, yet no connection has been established.  It could have been static or other natural causes – but again, there has been no definitive connection identified.  What has been ruled out is arson – there is no evidence that the fire was set deliberately.  While unsatisfying, we have to resign ourselves to the fact that we may never definitively know what started the fire.  But that doesn’t mean our investigation has run out of options.

Church caretakers were extremely concerned about fire, especially in the attic (known as “the forest”).  The attic was constructed of ancient timbers, kept dry for centuries under the cathedral’s lead roof.  The design of the structure was perfect for a fire to spread once it got started.  However there were no fire suppression systems, such as sprinklers or fire walls.  A conscious decision was made that these systems would diminish the aesthetics of the historical timber structure.  It may be that the fire protection plan underestimated how rapidly a fire would spread through the attic.  And it may also be the case that the sheer age of the structure (it had survived for hundreds of years through wars and revolutions) caused a false sense of invincibility.

The fact that these sorts of systems were considered and rejected is something we can learn from.  That isn’t to say that we should point the finger of blame at those that decided not to install sprinklers or fire walls.  There is no question that they were doing their best to protect the structure while preserving its heritage.  Hindsight bias can be cruel and unfair.  However, we can examine whether that same mindset was present when making decisions about buildings of similar historical significance – and not just in Paris.  Countless buildings of historical significance exist at this very moment, many of which have no fire suppression systems in place.  It’s not hindsight bias when we examine past decisions and alter our calculus going forward... that’s called “learning.” 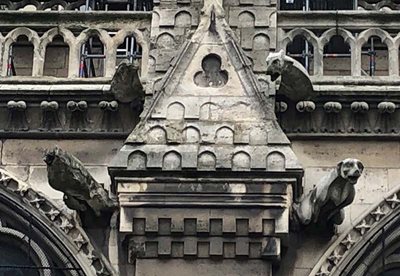 When we think about how things might go wrong in a system, we often look at how we might detect and correct a deviation before it becomes catastrophic.  Certainly those in charge at Notre Dame recognized this because they installed a very complex and robust fire alert system.  This system consisted of an array of different sensing equipment that was intended to provide caretakers with the earliest possible warning of any fire, allowing them to react quickly and regain control.

This fire alert system worked exactly like it was supposed to work.  A fire alarm was activated and a guard was sent to check it out.  However, he was sent to the wrong location.  This was because the alarm message was not correctly interpreted by the employee monitoring the system.  He was very new to the job – it was his third day.  Also, he had already worked an eight-hour shift but was staying on for an additional shift after his relief did not show up for work.  And the system itself was difficult to interpret.  The messaging provided was not intuitive.  This resulted in a delay of nearly 30 minutes.  In that time, the fire rapidly spread uncontrollably through the attic.

This also represents a learning opportunity.  Complexity on its own makes a system less reliable.  Add in the fact that the employee monitoring the system was both new and working his second eight-hour shift.  We also need to consider the elevated levels of stress that anyone is subject to in a crisis of this magnitude.  It is not hard to see how the fire alert system – including the humans involved – contributed to the delayed response. 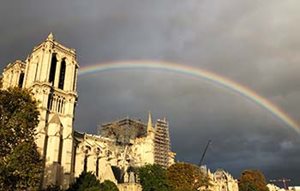 On the subject of the response, it was amazing.  Firefighters realized that saving the roof was a lost cause, so they pulled back to safety.  However, after the spire had collapsed, they saw that the fire was spreading to the two cathedral towers.  Heavy bells hung in the north tower – if it burned and they fell, they could do an immense amount of damage.  And, if the towers themselves collapsed, they could potentially bring the entire building down.  A team of firefighters fought their way up to the south tower.  This position allowed them to put water on the north tower, bringing the fire there under control.  However, they put themselves at enormous risk to accomplish this feat.

Participating in the response was approximately one hundred people who formed a “bucket brigade” to remove priceless items from the church.  While there were undoubtedly losses of priceless historical items, many items were saved due to this effort.

The cathedral roof was made from lead.  This lead melted and ran down into the flames.  Paris lead levels are generally five times the indoor legal limit, largely due to runoff from intact lead rooves.  At this time, it is uncertain whether the lead from the burning roof caused elevated levels in the areas surrounding the church.

Once we consider the design and the materials of the roof, the absence of fire suppression, and the difficulties introduced by the fire alert system, we can easily understand how an event of this magnitude could occur – even if we may never know the source of ignition.  But when we consider all the contributors to the fire, we can see that the ignition source itself may be the least-interesting aspect.  This is because all the other causes of the fire were present together for a considerable period of time.  You could argue that, given enough time, the cathedral was always going to burn.  It was just waiting for something to initiate the fire.

This lesson is relevant to every adverse event we investigate.  Most of the causes of your next accident, outage, or quality event exist at this very moment waiting – like Notre Dame – for a triggering event to set them into motion.  When we investigate past events, they offer a window into our future.  If we focus only on the triggering causes (and often the people associated with them), we miss the important “causal constants” that give us opportunities to design more resilient systems that reduce risk.

Note:  All solutions listed were provided by Sologic.  No specific set of solution recomendations have been published as of December, 2019.  Note that these solutions are based on the causes identified in the chart, however Sologic is not qualified to assess their feasibility or effectiveness.