​On February 19th, 2001 at approximately 5:16 PM Eastern time during the final turn of the final lap of the Daytona 500 automobile race, world-famous NASCAR driver Dale Earnhardt Sr. was killed when his car slammed into the outer barrier of the race track. 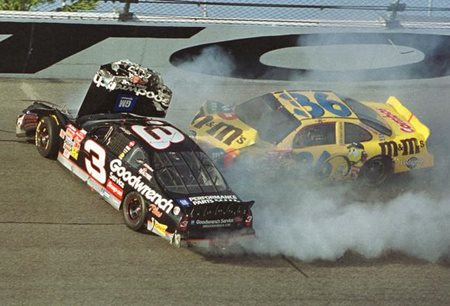 Earnhardt was negotiating the turn when he lost control after the left rear fender of his car came in contact with the right front fender of another car.  It is unclear whether Earnhardt drifted into the other driver or vice versa.  They were racing towards the finish in close proximity to each other and several other cars.  The impact broke the rear tires of Earnhardt’s car loose, sending it first to the left towards the infield, and then sharply to the right – across traffic – toward the outer barrier wall.  Another racer struck his passenger door just before his car slammed into the concrete barrier.

The sudden deceleration subjected Earnhardt’s car to an estimated -68 to -48 g-forces.  These forces are similar to dropping the car front-first from a height of 60’ onto a slab of concrete.  Earnhardt experienced basilar skull fractures – spiral fractures to the occipital and left temporal bones of his skull.  This type of injury can cause sufficient damage to the adjacent brain tissues to interrupt autonomic functions such as heartbeat and breathing.

The deceleration event began when the other racer struck the passenger door of Earnhardt’s car just before he hit the wall.  This impact jolted his head to the right and caused the muscles of his neck to reflexively tense up.  The final deceleration occurred a split second later when he hit the concrete wall at an estimated angle of 55° - 59° at a speed of 157 MPH – 161 MPH.  The crush properties of the racecar (an older design) and the fact that the wall was solid concrete meant that very little of the resulting forces of deceleration were absorbed. Reflexive tension in his neck along with the substantial decelerative forces caused the bones of his skull to fracture.

Earnhardt’s seatbelt was found to have failed during the crash.  At first, it was thought that the failed seat belt allowed his head to hit the steering, wheel causing the fatal injury.  The seatbelt failure was caused by the improper installation of the belt anchor.  The belt anchor should have been installed 2.5 inches away from the seat.  However, in order to provide greater driver comfort, the anchor was installed approximately 5 inches away from the seat.  This resulted in a suboptimal belt angle which caused the belt at the time of impact.  A subsequent investigation however determined that even if the belt had not torn, Earnhardt would have still likely experienced fatal injuries of the same type and extent because his head was insufficiently restrained to prevent such an injury.

Drivers had the option of using a special restraining device (called HANS – Head And Neck System) to prevent the neck from moving during a crash such as this.  Even though seventeen professional drivers had been killed by basilar skull fractures up to the start of the 2001 Daytona 500, Earnhardt and many other drivers declined to use the HANS devices, saying that the protective properties did not outweigh the discomfort caused by the device.  NASCAR had recommended, yet not required, the use of the HANS device.  In fact, after Earnhardt’s death NASCAR continued not to require the use of the device.  Only after another racer was killed four months later by essentially the same type of skull fracture did NASCAR begin requiring use of the HANS device.

The medical response was adequate.  However the injuries sustained were simply too great for Earnhardt to recover.