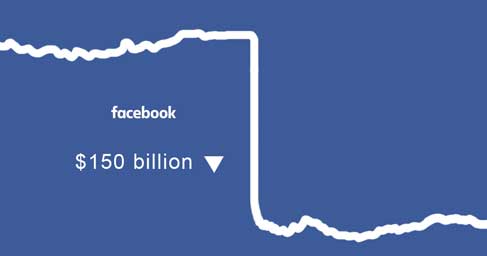 Conducting a root cause analysis of such a loss can be useful in trying to understand it because it gathers together information from a variety of sources.  Setting up an RCA like this is best done with a simple “exceedance” cause pattern.  An exceedance pattern is really just a math problem expressed in a logic diagram.  It goes like this:  “New Value” is caused by “Beginning Value” + “Ending Value.”  In this case, the ending value was less than the beginning value, so the result is a negative value or a “loss.”

Solutions Cause and Effect Summary

Value 7/25/2018 = $629.58 billion
Market valuations are always the result of what happened in the past – in this case, buyers had bid up the value over time to $629.58 billion – and also what they expect will happen in the future.  Facebook is, along with Google parent company Alphabet, Amazon, and Apple, one of the “trustworthy” tech firms.  That means that shareholders had come to expect healthy growth with relatively low risk.  Facebook’s fundamental numbers looked good, and frankly, still do.  However, nothing stays the same forever.  The reporter Shira Ovide of Bloomberg speculates that perhaps Facebook leadership did not adequately flag impending warning signs to investors.  Or perhaps they did, but investors did not pick up on it.  Or maybe Facebook is actually being over-cautious – a tactic which hurts them in the short-term, but may help them beat expectations in the mid- to long-term.  In any case, up until yesterday investors had confidence in the stock.  So the price and subsequent valuation reflected their expectations.

Value 7/26/2018 = $510.00 billion
Everything changed in after-hours trading prior to the market open on 7/26/2018.  A substantial number of shareholders decided to sell because of reports that earnings growth and growth in the number of users were both going to miss expectations.  Facebook makes most of its money from advertising.  Advertising revenue growth has tapered off recently, likely due to the slowing in growth of new users along with a greater unwillingness by Facebook to fully exploit its users for the purposes of advertising.  Even though the number of users continued to grow, the rate of growth was lower than expected.  It’s hard to say exactly what is going on, although it’s likely a combination of new potential users choosing different social media platforms along with an exodus of existing users.  The availability of other social media networks along with a general loss in confidence in Facebook due to recent breaches in user trust led to the slowdown in user growth.  Facebook also warned that expenses would be increasing due to security and privacy enhancements.

All of this represents sort of a vicious cycle.  Users lose trust and therefore leave or never join, slowing the overall growth in usership.  Advertisers see this and are less willing to spend money with Facebook.  And, to offset the decline in trust, Facebook has to spend more money.

Loss of Trust:
If the service is free, then you are the product.  This model only works though if you (the user) has sufficient faith in the service.  The loss of trust is really at the heart of this problem.  Too late, Facebook realized that it had provided a platform that was fertile ground for abuse.  It allowed firms like Cambridge Analytica to access and exploit its users’ data for insights into how to best influence USA politics.  And it provided an environment for the propagation and dissemination of “fake news” – news that looks as though it has been properly researched, but has limited (or no) basis in fact.  Facebook is not the only environment that is ripe for the proliferation of fake news – Twitter, You Tube, and others also provide such an environment.  Fake news proliferates explosively because it is often unique in comparison to other news feed items and it’s provocative in that it taps into strong-felt emotions.  These two properties cause it to travel up to six times faster than actual news.  Proliferators of fake news recognized this before social media platforms did and were able to exploit it to further their agendas.  Facebook did not recognize the proliferation, or if they did, they did not respond to it in a timely and/or meaningful way.

Once evidence of the exploitation of user data and the proliferation of fake news became front-page headlines, trust in Facebook took a big hit.  This waning trust resulted in a decline in new user growth, a decline in ad revenue, and increased expenses.  This news came out explicitly during an investor conference call after markets closed on 7/25/2018.  When they opened on 7/26/2018, the stock tanked.

Contact us to learn more about RCA training and software.

NOTE: Sologic did not investigate this incident and does not attest to the accuracy of the RCA.  The RCA was assembled with publicly available information and is intended to illustrate how this event could look in Sologic’s RCA format.